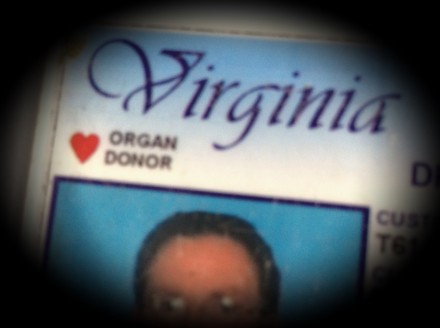 This past week I had the opportunity to meet a man who recently had a liver transplant. He was recovering nicely and was in improving health. However, he is also on dialysis and once he reaches an acceptable level of health, will need a kidney transplant as well.

“What would it be like to be a donor?”, I wondered to myself. My mind spun in possibilities.

I know a husband who gave one of his kidneys to his wife who needed a transplant. It took him longer to recuperate than her, but they’re both doing wonderfully. What a sacrifice! What love!

Last night, I watched the 1993 movie, “In the Line of Fire,” the Clint Eastwood movie in which he plays an aged Secret Service agent. In the story line, 30 years earlier he had been assigned to the motorcade when President John F. Kennedy had been assassinated. The memory still haunts him. Fast-forward to today: In the course of a routine investigation, he discovers a plot to assassinate the modern-day president. Throughout the movie, he battles the memory of his failure to protect Kennedy and wonders if he really had the courage to take a bullet for the president. In the climactic scene, he does, indeed, take a bullet for the president. He’s wearing a bullet-proof vest and survives, but proves he is willing to do his duty and lay down his life for the President of the United States.

Our military heroes are in the line of fire for one another all the time. They show us what sacrifice means. While we might donate a kidney for a loved one or friend, another thought came to me: Would I donate a kidney or organ to someone I didn’t know, or worse yet, someone I knew was living a selfish life, a life lived only to please themselves?

I am an organ donor. Once my life is over, my organs – if usable – may be able to save or improve the life of another. But what if, in my opinion, they don’t deserve it?!? Thankfully, I don’t get to make that decision.

However, I know someone who did. There was One who laid down His life for others, even when they didn’t deserve it. He showed us not the “greater love” that He spoke of above — laying down a life for friends, but the GREATEST love. Paul tells us:

God knew that some would waste their life on selfish living. He knew some wouldn’t be worthy of a kidney donation, let alone a life laid down in sacrifice. He knew that we weren’t righteous – none of us – and yet, in His astounding, extravagant love, sent His Son to die for us.

That is love. Not “Oh, I’m in love with you, baby.” Not even the wonderful, selfless, sacrificial human love of a husband for a wife who needs a kidney. This is a love that trumps all. Dying for the selfish. Dying for the ungodly. Dying for me. Dying for you. That is the GREATEST love. That is God’s love.

I don’t know about you, but that changes me.

For God so loved the world that He gave His one and only only Son, that whoever would believe in Him would not perish but have eternal life. (John 3:16)

Yesterday, I came across a post about the Church on Facebook that was quite thought-provoking. It was an open letter to the Church about why folks are REALLY leaving the church or won’t venture inside a Sunday morning service in the first place. In a nutshell, here are the reasons:

1. Our (the Church’s) Sunday productions have worn thin.
2. We speak in a foreign tongue – Not speaking in tongues, but too much church lingo.
3. We can’t see past our own building.
4. We choose lousy battles.
5. Our love doesn’t look like love.
(Source: http://www.churchleaders.com/outreach-missions/outreach-missions-articles/244545-dear-church-heres-people-really-leaving.html)

“It feels like a big bait-and-switch sucker-deal; advertising a ‘Come as You Are’ party, but letting us know once we’re in the door that we can’t really come as we are. We see a Jesus in the Bible who hung out with low-lifes and prostitutes and outcasts, and loved them right there, but that doesn’t seem to be your cup of tea.

Church, can you love us if we don’t check all the doctrinal boxes and don’t have our theology all figured out? It doesn’t seem so.

Can you love us if we cuss and drink and get tattoos and, God forbid, vote Democrat? We’re doubtful.

Can you love us if we’re not sure how we define love, and marriage, and Heaven, and Hell? It sure doesn’t feel that way.

From what we know about Jesus, we think he looks like love. The unfortunate thing is, you don’t look much like him.”

I was at a local church to see a southern gospel group, The Talleys, last night. They did a song entitled, “The Broken Ones”, and to be frank, I almost couldn’t stop crying. The chorus goes like this:

Love the broken ones, the ones that need a little patchin’ up
See the diamond in the rough and make it shine like new
It really doesn’t take that much, a willing heart and a tender touch
If everybody loved like He does, there’d be a lot less broken ones
(© Newvip Songs)

There’s just one more thing: WE ARE ALL BROKEN ONES. There is not one among us that is not broken in some way, shape, or form. But broken people cannot fix brokenness. We need divine intervention. We need the love of Jesus.

Today, as you go through your church doors, keep an eye open for the broken ones.

They’re sitting right next to you.

However, I think we all get caught up in performancism. We fall into the trap of believing that the more value we contribute to society, the more valuable we are. Tullian Tchividjian writes:

“Performancism is the mind-set that equates our identity and value directly with our performance. Performancism sees achievement not as something we do or don’t do but as something we are or aren’t. How we look, how intelligent we are, how our kids turn out, what people think of us — these things are synonymous with our worth. In the world of performancism, success equals life and failure equals death.”

Think about it. We do this. All of us. It may be subtle, but we do it. We value those who are successful. We treat them better. We cozy up to them. We want to be just like them. If we have a success, we feel like a success. If we fall and fail, we feel like a failure. We create identities based on our behaviors. Tchividjian writes:

“In other words, we’re exhausted because we’re trying to rescue ourselves from a meaningless existence by what we do. We’re weary because we feel the burden to create our own validation. But broken people cannot fix brokenness. We need divine intervention. We need validation, but we can’t muster it ourselves. What an amazing thing, then, that the holy God of the universe, who set the standard for validation higher than we could ever reach, reaches down to us and proclaims over messy sinners who can’t ever get their own act together, ‘Justified!'”

We are ALL of equal value and worth, based on the fact that we all are made in God’s image. We are all incredibly valuable simply because Jesus chose to die for each one of us… and all of us. “For God so loved THE WORLD…” John 3:16 says. All of us. Each of us.

That is the Good News. 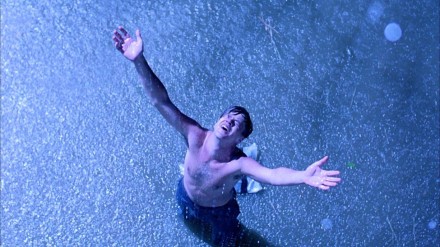 I’ve thought of two resolutions, although they’re not new.

A couple of weeks ago during a staff meeting at Love INC, we were talking about what 2015 might hold — both for the ministry and personally.

A thought came to me: A just want to be dumber and weaker. These are my resolutions for the coming year (and beyond).

I’m discovering that the older I get, the less I know. Yes, I may have gained more knowledge in the world’s eyes by taking various classes or by learning through “the school of hard knocks,” but in the deep things of life, I know very little. And as I get older, I see that I will never have the answers… at least not on this side of heaven.

Through schooling, experience, and through trial and error (mostly error), I’ve learned a few things, but just enough to be dangerous. I can just as easily stick my foot in my mouth today as I could twenty years ago. I can just as easily rush into a bad situation and make it worse. But worse than anything, I can think that I can get by on my own smarts and cleverness. I easily think that I can figure things out on my own. I can easily fall into the trap of trying to pull myself up by my bootstraps, independent of any help from God (who gave me any smarts or abilities I may have in the first place).

I want to go into every situation I face in the coming year with zero preconceived notions, and with both ears wide open ready to listen to those around me and most importantly, to hear the voice of God. I want to hear God’s still, small voice. I want His wisdom to guide my decision-making this year.

Secondly — and surely entwined with being “dumber” in the coming year — I want to be weaker. I want to be slow and prayerful to react to the chaos around me (sometimes called “life”). I can easily fall into the trap of trying to work things out by myself. I can easily fall prey to thinking that by trying harder, re-doubling my efforts, or “cleaning up my act”, I can earn some sort of special favor with God. I can easily think that I can just “make things happen.”

I don’t want to solve problems by myself. I want to be dependent on God’s strength, His wisdom and His promises. I want to rely on those God has placed in my life and partner with them. I want to hear their wisdom and make use of their talent, if possible. I am inherently flawed. I know this. I am genetically sinful. Again – on this side of heaven – I will never be free of those characteristics. I am weak. That’s why I need Jesus and His grace, His strength, and the power of the Holy Spirit. I need it… desperately.

So, it may be counter-intuitive, but I want to be dumber and weaker in 2015. And maybe, just maybe, I’ll catch a glimpse of God working… and He will get (and deserve!) all the glory.