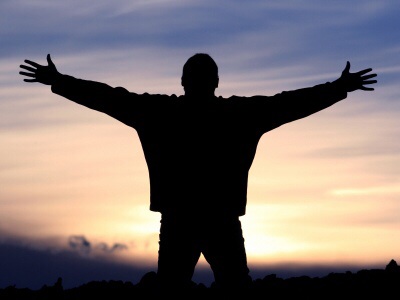 Ephesians 3:18 NLT says:
“And may you have the power to understand, as all God’s people should, how wide, how long, how high, and how deep his love is.”

This is a prayer of Paul’s… that his readers would know and understand about God’s love. He knew that if we really – and I mean REALLY – understood the love and acceptance of God, we would be changed… we would be transformed… we would be made whole and complete.

For he goes on to say:

“May you experience the love of Christ, though it is too great to understand fully. Then you will be made complete with all the fullness of life and power that comes from God.” (v.19)

The fullness of life Paul speaks of and the abundant life John talks about (John 10:10) are one in the same. Being loved by God makes us lovable. That understanding in itself is liberating for some who feel unloved. It is what the human heart was made for: to be loved and to love. Once we really understand that we are loved and embraced by God despite our flaws, shortcomings, sins, and failings, it enables us to love and serve others with the same kind of love. That is abundant life.

The power we then experience, knowing that we are loved, accepted, embraced, and even rejoiced over, is the power to live with abandon for God and God alone. We are able to then completely trust Him without needing to know the reason why certain things happen. We just trust. And it is the power to live above sin and temptation. In short, it is power to live victoriously.

May we all have the power to understand and experience God’s love today.

It is Good News. Go to church today. Chances are, you’ll hear more about it.

In Chapter 5 of his book, The Good and Beautiful Community, James Bryan Smith talks about “The Reconciling Community”, one which forgives readily and lives healed, healthy lives. He expounds on The Parable of the Unmerciful Servant.

You may know the story: The servant has a huge debt that he owes his master, and the master tells him that he’s going to lock up the servant and his entire family until he can pay the debt. But the servant pleads for mercy and the master relents and gives him more than he deserves: freedom. Free from debt and freedom from being a servant any longer.

Then the forgiven servant immediately goes to someone who owes him money and, instead of paying it forward, he demands repayment. The master hears of this atrocity and brings the forgiven servant back, reprimands him and throws him and his family back in jail to be tortured. The lesson is simple for us: Because we have been forgiven, we should forgive. (See Matthew 18:21-35)

First, we don’t forgive to feel better. We are told that if we would just forgive, it would help us heal. But forgiveness is not therapy. In some situations, it seems impossible to forgive. That’s because it is — in our own power. We can’t will ourselves to forgive.

His second point is where the healing comes from, at least for me. In the story above, the unmerciful servant was originally forgiven a HUGE debt. He could have worked the rest of his life and still not paid the debt. The debt was huge and he got more than the debt being wiped clean… he and his family were given their freedom!

In comparison, the debt of the one who owed this servant money was miniscule. James Bryan Smith points out that the first debt is over 600,000 times larger than the smaller debt.

Meditate on that for a moment. The things that we have been forgiven of (and that we will be forgiven of in our lifetime) are overwhelmingly huge. As James Bryan Smith says, “The point is clear: we have forgiven for so much more than we will ever be called on to forgive.” But not only has the slate been wiped clean, we get the Kingdom, too!

This is not be glossed over. This is a point to be pondered and internalized. And this is where the power to forgive comes from. As we get this narrative deep down within us, we receive healing and out of that healing, we find the power in Christ to forgive.

This does not minimize the deplorable things that have been done to you and me, whether it be adultery, sexual abuse, rape, or even the murder of family or friends. But as you and I meditate on how much we have been forgiven, we find the grace we need to forgive.

Get rid of all bitterness, rage, anger, harsh words, and slander, as well as all types of evil behavior. Instead, be kind to each other, tender-hearted, forgiving one another, just as God through Christ has forgiven you. (Ephesians 4:31-32)

Do you know that God holds nothing against you? Maybe this is old news to you. For me, this is a revolutionary idea.

For me, I was constantly trying to get back into God’s good graces, like I would any other relationship from childhood to adulthood. Addicted to the approval from others, I would always try to earn it. Do enough and I was good; not do enough (or worse, rebel), and I would have to work to get myself back into favor. This process carried over into my relationship with God, although I never really realized it until a few months ago. I talked about God’s grace and was certainly thankful for His forgiveness, but every time I screwed up, I would work at getting back to where I need to be. Pray more, read more, serve more. It was subtle, but it was – subconsciously – my mantra. “I really would need to put my spiritual life ‘on the front burner'” or feel like “I need ‘to step it up’ in my spiritual life.” These would be my thoughts. Maybe you’ve had them too.

Now, I have come to realize that Jesus’ words are really true. “It is finished” (John 19:30) applies not only to Jesus’ lifelong journey to the Cross, or to the fact that the requirements of the Law had been fulfilled, but also that all work has been finished to bring you and I back to God. We can now come to God without fear or worry of punishment. We don’t have to work to get back into God’s good graces. Listen to these words by the apostle Paul:

And all of this is a gift from God, who brought us back to himself through Christ. And God has given us this task of reconciling people to him. For God was in Christ, reconciling the world to himself, NO LONGER COUNTING PEOPLE’S SINS AGAINST THEM. And he gave us this wonderful message of reconciliation. (2 Corinthians 5:18-19, NLT, MY EMPHASIS)

“This is a clear explanation of the finality of the cross. God – in Christ – is not counting our sins against us. God stopped counting and apparently never took it back up. God is no longer dealing with us on the basis of our sins but of our faith. Jesus died for all the sins of all the people for all time — and that means you.”

Do see why Paul calls it a “wonderful message of reconciliation”? Do you see why it’s called the Good News!?!

It really IS finished!