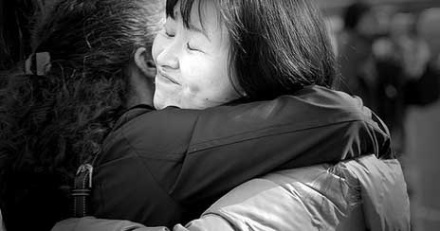 Forgive as the Lord forgave you. (Colossians 3:13b)

“So what is Jesus telling us when He instructs us to forgive others? And why does He connect it with the forgiveness of God in Mark 11:25? He gave several illustrations, through parables, about the necessity of forgiving others because we ourselves have been forgiven (See Matthew 18:21-35). We can easily make the mistake of thinking that divine forgiveness is determined by human forgiveness — in other words, to think that God only forgives me if I forgive others, and in the exact measure that I forgive others.

“We cannot say, ‘I accept God’s forgiveness for my sins, but I refuse to forgive others.’ This is actually impossible, not just theologically but psychologically. If we truly know – in the depths of our being – that we have been completely forgiven, then we naturally forgive those who have harmed us in some way.

“When we do find ourselves struggling to forgive someone, we should not grit our teeth and merely try harder to forgive them. Instead, we should dwell on the fundamental reality that we ourselves are people who need forgiveness, and then set our minds on the reality that God, in Christ, has forgiven us completely.”

And we all desperately need the healing touch of the Savior.

The more places we stop on our motorcycle trip, the more broken the world seems. I’m not talking about the systems of health care, the economy, or our government, although you could make cases for each being broken.

What I’m talking about is all the broken lives. Divorce, illness, dashed dreams, lonely hearts, and longing for something better… something more. Today, Paul and I crossed paths on our motorcycle trip with two such lives filled with brokenness. 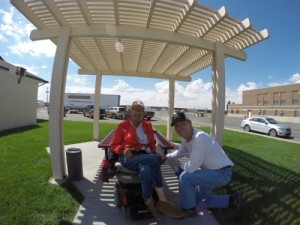 The first is Doyle, a military veteran whose health is failing, benefits are being curtailed, and more importantly, whose wife passed away just over a year ago. He sits under a gazebo next to a convenience store watching the traffic go by from his motorized chair. His home is six blocks away, but it is a lonely place and he can’t bear to be there. His kids live locally but I get the feeling don’t see him as frequently as they should. He doesn’t have a church home ever since he became disillusioned because nobody seemed to care while his wife was sick and dying.

Paul and I visited with him while we were cooling off after crossing half of Wyoming. After we talked, I offered to pray for him and as I did, he began to sob. He actually shook from sobbing while I prayed. It was heartbreaking, but as we said goodbye, he seemed to have a little twinkle in his eye and maybe a little more hope than 20 minutes earlier.

The other broken life we encountered was Ted. He wandered up to my bike at another stop admiring my stickers and he wasn’t hesitant to tell me his story after I asked him if he rode one too. His dreams were shattered and his life was broken – literally – in 1997. He was involved in an accident in which he broke his back. It wasn’t diagnosed until 10 months later after never really recovering. He had surgery and has been on disability ever since. Since the diagnosis took so long and his disability benefits didn’t begin until after surgery, he lost his home to foreclosure. Ever since, for the last 15 years, he’s been living out of his camper. He moves from place to place, until the owner of the property or the town makes him move. Broken bones, broken lives. 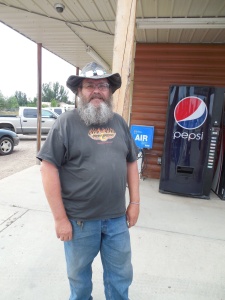 They’re everywhere, if we look. But as I reflect on those two, I know that God made a difference in their lives as we happened upon them. For Ted, it was a hug. For Doyle, it was the heaving sobs. Both were touched. And that’s what it’s all about.

We’re taking our faith on the road again today. I can’t wait to see what awaits.

(Incidentally, prayers are needed for a rider named Tim who was involved in a motorcycle accident which we witnessed; and also for a group of riders we came upon which required three ambulances and a gurney)

I read an article a few nights ago about Donald Sterling and just had to share some thoughts from it. Donald Sterling, if you fell off the planet in the past two weeks, is the embattled owner of the Los Angeles Clippers NBA basketball team. He made some shocking, deplorable remarks to his girlfriend that were recorded which included that she shouldn’t associate with black people and he wished that she wouldn’t “bring them to his games.” The remarks are appalling, indeed, and everyone, seemingly, has weighed in on this issue – from LeBron James and Michael Jordan to President Obama.

In his article, “Jesus Came for the embarrassments”, Nick Lannon writes:

“It seems to me, though, that there is at least one thing left to say, one thing that I’ve not heard amidst the talking heads, one thing that’s being drowned out by the outrage: I’m not all that different than Donald Sterling.

“To frame our discussion, let’s use a tweet from ESPN.com’s NBA analyst Kevin Pelton, who wrote this on Saturday:

“@kpelton: Important Sterling takeaway: If it’s so hard to get rid of an embarrassing owner, the vetting process better be airtight.

“What Pelton is referring to here is the vetting process done by the NBA and other owners before giving a prospective owner the opportunity to buy into their most exclusive of clubs. There have been many calls for the NBA to ‘force’ Sterling to sell the Clippers, but there doesn’t seem to be any kind of precedent—or legal recourse—to make that happen. Pelton suggests that if kicking an embarrassment out is impossible, the league should make extra sure that they don’t let embarrassments in in the first place.

“Here’s the pertinent fact for our discussion: We are all embarrassments!

“Too often, we think of Christianity as an NBA-like exclusive club from which we’d like to keep potential embarrassments. When someone on the inside has a public ‘fall from grace,’ we wonder aloud to each other if they were ever truly members in the first place. We keep our vetting process airtight, praying that our club avoid embarrassment.

“What if Jesus had sentiments similar to those Pelton expressed? In Part 13 of his Romans sermon series, Pastor Tullian Tchividjian asked this question. ‘If he’s going to be such an embarrassment,’ Jesus might say, ‘I’ve got to make sure my vetting process is airtight.’

Lannon goes on to add that if Jesus had a “vetting” process to get into the Kingdom, we’d all be in trouble. He says, “We need a God who, in Christ, does not vet. We need a God who knows us to be the needy, prideful, prejudiced, self-glorifying Donald Sterling people that we are, and who comes to us in our need. We need a God who doesn’t wait for us to clean up our act. Donald Sterling has proven himself an enemy of the NBA, and the NBA is going to do all it can to punish him for it. Jesus Christ, on the other hand, was sent on a mission specifically to rescue his enemies (Romans 5:10).

“It might be fair for Donald Sterling to lose his NBA team. That’s for lawyers to decide. We need a God who is better than fair; in fact, a fair god leads inexorably to our destruction. We need a God of mercy. And in Christ, the rescuer of enemies, we have one.”

(Note: Two days ago, Donald Sterling was banned for life from the NBA, fined a hefty amount, and ordered to sell his team. Stay tuned.)

My friend Cindy is a deep thinker and I mean that in the most complimentary way. She always is pondering something meaningful and wonderful about life. She loves God and it shows.

Yesterday she got my wheels turning. In the morning, on Facebook she asked, “If you had five minutes to FaceTime with God, what would you ask Him?” In the early evening, she then posted:

“If I could FaceTime God to ask Him one question, my question to Him would be: What do you see, God, when you look at me?

“If the purpose of Christianity is to transform us into the likeness of His Son, I would want to know how much of Jesus does God see in me.

“I doubt I would like the answer, but I would still ask.”

How much of Jesus does God see in me? What a great question!

But I think she would like the answer. If you have given your life over to Jesus and have accepted His sacrifice for your sins, then I think you would like God’s answer, too.

God loves us so much. He loves us in spite of… us. There’s nothing we can do to change that. You and I are the apple of His eye. (Psalm 17:8) He delights over us with SINGING! (Zephaniah 3:17) I can’t even wrap my head around that! And since we have been clothed with Christ (Galatians 3:27), I believe that when God looks at me and you, Cindy, He sees Jesus. In fact, God’s Word says our life is now hidden with Christ in God (Colossians 3:3).

How much of Jesus does God see in me? All of Jesus. Hallelujah!