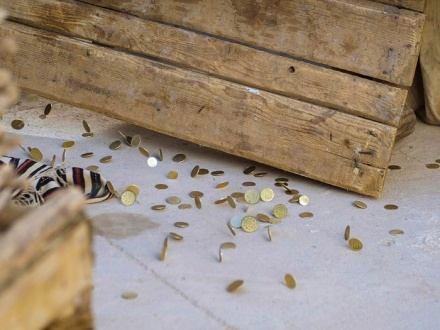 “Turn the tables.” It is certainly an idiom in our culture. It means to manipulate circumstances to gain an advantage over an adversary. Like so many of our other idioms (e.g. “Once and for all”), it may find its origin in the Bible.

It’s Passion Week on our calendars. For Jesus, it’s the week His entire life has pointed to. Sunday was marked by the throngs heralding His entrance into the City of Kings, the City of David: Jerusalem. They laid down their cloaks and palm branches in reverence to this king, who they hoped would free them from Roman rule. This man, Jesus, had also freed many from other things: demons, disease, oppression, illness, and even death. He was holding His own against the religious leaders of the day, making them so uneasy, they were plotting to do away with him. In short, he was turning their world on its ear.

He was also turning over tables. Literally. On Monday, He boldly entered the temple to teach only to discover that things hadn’t changed from an earlier visit and that profiteering was the main focus at the temple, not the worship of God. Jesus drove the moneychangers out in a whirlwind of activity, declaring again the purpose of the temple: “My house shall be a house of prayer.”

On Tuesday, he was again in the temple courts, this time being questioned by the religious leaders asking Him, “Who authorized you to do that?!?” Jesus turned around the questioning, asking them if John the Baptist’s teaching was from God. John was extremely popular among the people, a faithful martyr and prophet. If John’s was godly, then Jesus was legitimate, because John proclaimed Jesus as the coming Messiah. If John’s teaching were not from God, then the religious leaders would certainly lose the support of the throngs. They were stuck. They finally answered a weak, “We don’t know“, and in the process, lost their credibility as interpreters of God’s Word and of how God works. They looked bad and they knew it.

“This was a day of turning the tables on common thought. God’s people had become pragmatists. They saw everything in terms of an economy— they made deposits and took withdrawals and measured their standing in the world according to how well they balanced the good with the bad in their lives. This had become their religion, and God had become another creditor come to settle debts.” (From Behold The King of Glory)

We still do this today. We still think that if we do good things… if we live a “good life” (as defined by our culture, not our God), then we will build up some sort of spiritual bank account of “good” with God and He will certainly pour out His favor and blessing upon us. He becomes essentially a banker or a spiritual account manager which we’ll have to answer to, or settle our account with, at the end of our days.

Jesus turns the tables on this thought, supplying the only “good” there will ever be: Himself. He supplies, by His sacrificial death and subsequent resurrection, the only blessing and favor we will ever need: salvation and His presence in our lives forever… both as we live out our days on earth by the indwelling power of His Spirit, but also after our earthly days are over in everlasting life filled with His love, wholeness, and joy.

This is a week in which Jesus REALLY turns the tables, giving us life from death.

This week “It is finished.”