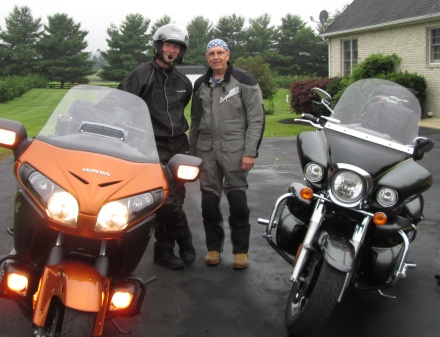 It doesn’t matter where Paul Prince and I go… we should be called the Rainmakers!

Three years ago we headed to the Northeast, rode through Vermont, and a month later they had serious flooding. Two years ago, we went across Texas and Oklahoma and it rained the entire way, in a region that hadn’t seen a drop in two months – literally.

Today, the first day of the “Great Plains Ride”, it was a day of avoiding rain wherever possible. And not just rain, but Paul and I traveled an extra 160 miles to avoid a SERIOUS thunderstorm through Charleston, WV. It was a tremendously large storm and we rode through the earliest portion of it on US60 in West Virginia, but that was enough! We decided to head north to ride ahead of it, around it, and avoid the bulk of it.

US60 is a wonderful road if the weather is nice, but is horrible if it’s raining, especially if you’re on two wheels. We diverted all the way north to Clarksburg, WV and then headed west on US50. There were two thunderstorm cells as we headed west… one to the north of us and one to the south. It was as if God parted the Red Sea for us. We went through on dry ground (pavement) the entire way to the Dayton, OH area.

We had a good dinner at a BBQ place called Werner’s and met a waiter named Mark, trying to earn some extra money during his summer off from teaching second grade. He is a Christian and we thanked him for pouring himself into the local children.

Nothing otherwise noteworthy. Just two tired motorcyclists ready to do it again tomorrow.

I wonder what tomorrow holds…