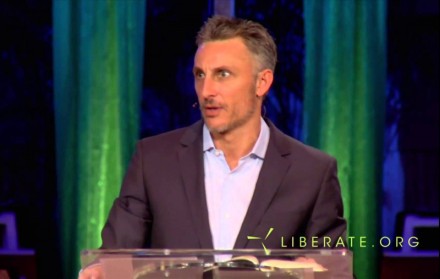 Yesterday I discovered that another nationally-known, prominent Christian pastor has fallen to “moral failure.” In other words, he committed adultery. I was heartbroken for him, his wife (revealed to also have an affair), and his kids. After meeting with his church’s leadership, he resigned. His mega-church will be shaken to the core, as will the national ministry he founded. The ripple-effects will be widespread.

This is Billy Graham’s grandson, Tullian Tchividjian. Not only will his immediate family, his megachurch, and the national ministry, Liberate, be shaken, so will his extended family. Although there they don’t always agree theologically or politically, I’m sure the entire family is broken.

The effect doesn’t end there, of course. I find myself grieving as well.

This is a man who has always said how desperate he is for the grace of God. No more so than now, I suspect. He is a man who knows (hopefully, now more than ever) “There is now no condemnation for those who are in Christ Jesus.” (Romans 8:1) But he has tweeted an apology to all who would hear it that he knows sin has its consequences.

His witness.
His credibility.

I think about all who listened to his eloquent preaching and beautiful writing and I cringe and shake my head. It’s tragic.

If you’re reading this and are contemplating an affair or are hoping that your flirtations might lead somewhere, just think of the consequences. They are lifelong. Believe me, I know. Rightly or wrongly, they will affect your credibility and influence for the rest of your life. Is there grace? Praise God, yes! But the ripple-effect of the consequences are far-reaching, too.

You may think I’ve put Tullian Tchividjian on a pedestal. I don’t think I have. Was I influenced by him. Oh yes! Thankfully, yes! I don’t set aside my love for the Gospel and know we all need it everyday. I will continue to be impacted by his ministry. Partly because of his preaching and writing, I have truly discovered the love of God and the true nature of the Gospel. Although another Christian leader has fallen, Jesus Christ and His love remain steadfast.